All of the blog articles on this blog are my own personal OPINION. They do not reflect on any other people in my life that I may associate with, my children or my spouse.

Middle English (in the sense ‘mystical meaning’): from Old French mystique, or via Latin from Greek mustikos, from mustēs ‘initiated person’ from muein ‘close the eyes or lips’, also ‘initiate’. The current sense of the noun dates from the late 17th century. From mystes “one who has been initiated”   From <https://www.etymonline.com/word/mystic>

Philosopher scientist: when you go to look up this term, there are no proper definitions listed, as if there is an effort to wipe out, erase the knowledge of such men and how their minds worked. A philosopher scientist was a person who was guided by the intuition and knowledge that the world didn’t end at the physical that explored how both worlds, physical and nonphysical interacted. These men were by definition, mystics. A mystic is a person who peers into the unseen on purpose with the intent of learning and finding out how it interacts with the world. This is called Cross-Disciplinary research/thinking, the very opposite of a specialty-within-a-specialty, like todays view of science and provides a much greater understanding of the bigger picture. Today’s science is much like the ‘Three Blind Men and the Elephant’ in that each one of those blind men were correct, but they couldn’t perceive the whole elephant.

This is exactly what most of the leading thinkers are beginning to understand as they see the convergence of data happening, not only in the phenomenal/spiritual aspects of study but the scientific rational areas dovetailing one into the other. 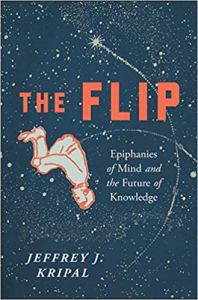 The Flip: Epiphanies of Mind and the Future of Knowledge Paperback – March 12, 2019 by Jeffrey J. Kripal (Author)

A “flip,” writes Jeffrey J. Kripal, is “a reversal of perspective,” “a new real,” often born of an extreme, life-changing experience. The Flip is Kripal’s ambitious, visionary program for unifying the sciences and the humanities to expand our minds, open our hearts, and negotiate a peaceful resolution to the culture wars. Combining accounts of rationalists’ spiritual awakenings and consciousness explorations by philosophers, neuroscientists, and mystics within a framework of the history of science and religion, Kripal compellingly signals a path to mending our fractured world.

Jeffrey J. Kripal holds the J. Newton Rayzor Chair in Philosophy and Religious Thought at Rice University and is the associate director of the Center for Theory and Research at the Esalen Institute in Big Sur, California. He has previously taught at Harvard Divinity School and Westminster College and is the author of eight books, including The Flip. He lives in Houston, Texas. From <https://www.amazon.com/Flip-Epiphanies-Mind-Future-Knowledge/dp/1942658524>

In this interview with Gordon, it is evident that Dr. Kripal has a deep grasp of what Steiner wrote about when he talked about how there was a danger involved in scientism overtaking the world and the 8th circle becoming a new fake reality by dint of losing the ability to see beyond the physical. (they do not talk about Steiner – but there is a huge parallel – see: https://www.youtube.com/watch?v=0EbntOIYdPM&t=4s)

Dr Kripal does, however talk about the wildly mystical adventures of hard core scientists that have led them to major discoveries and how these experiences create a ‘Flip’ in their world view. What I love about this interview is Gordon’s insistence on an even wider perspective than just ET’s or the like. To him, this is a cross-cultural, cross disciplinary, anthropological, scientific, ethnographical, magical rediscovery of the seen and unseen in the academic community.

So too does Rey Hernandez with Jeffery Mishlove. Rey’s new book is:

This 820 page book details the academic research findings of the world’s first comprehensive multi-language quantitative and qualitative 5 year academic research study on individuals that have had UFO related contact with Non Human Intelligence (NHI)– The FREE Experiencer Research Study. Over the last 5 years FREE has collected detailed responses to 3 extensive quantitative and qualitative surveys from over 4,200 individuals from over 100 countries. Our survey findings from these thousands of “Experiencers” contradict much of what is circulating in mainstream materialist Ufology. Our academic book will establish a new paradigm for viewing the UAP (UFO) Contact Phenomenon. FREE argues that “Consciousness” and the paranormal and psychic aspects of this phenomenon is the key to understanding this complex phenomenon instead of the traditional materialist perspective of “nuts & bolt’s” Ufology. The Dr. Edgar Mitchell Foundation for Research into Extraterrestrial and Extraordinary Experiences, or FREE, is a 501c3 Academic Research Not for Profit Foundation. FREE was co-founded by the late Apollo 14 astronaut Dr. Edgar Mitchell, Dr. Rudy Schild, an Emeritus Research Astronomer at the Harvard/Smithsonian Center for Astrophysics at Harvard University, Australian researcher Mary Rodwell and Rey Hernandez, an Attorney and Experiencer who was a Ph.D. Candidate at the University of California at Berkeley. FREE is comprised of retired academic professors and lay researchers who have been researching the field of Unidentified Aerial Phenomenon (UAP) and contact with Non-Human Intelligence (NHI) for more than 30 years. The Executive Director of FREE is Harvard Astrophysicist Dr. Rudy Schild. From <https://www.amazon.com/Beyond-UFOs-Science-Consciousness-Intelligence/dp/1721088652/ref=sr_1_1?keywords=beyond+ufo%27s&qid=1554994383&s=books&sr=1-1>

In a recent interview, New Thinking Allowed with Jeffrey Mishlove Published on Apr 10, 2019, Rey Hernandez, JD, cofounder of the Edgar Mitchell Foundation for Research on Extraterrestrial and Extraordinary Experience (FREE), editor of and contributor to the anthology, Beyond UFOs: The Science of Consciousness and Contact with Non Human Intelligence, Volume 1; Rey describes a series of remarkable experiences in his own life involving remarkable healing, non-human entities, and UFOs. These led him to develop the hypothesis that a variety of “contact modalities”, usually considered distinct phenomena, are all related. These include shamanic journeys, out of body experiences, ghosts and spirits, UFO, remote viewing, channeling, and mystical states of consciousness. These visionary experiences led him to contact astronaut Edgar Mitchell and subsequently create the new organization, FREE. From <https://www.youtube.com/watch?v=5Ckk8xO_wbE>

In this interview, we get to hear Rey say basically the same thing as Dr. Kripal. Granted, these are two academics – but they both have had their own “Flip” experience. Rey’s lead to a world study and data base detailing findings that prove the validity of Dr. Kripal’s book ‘The Flip”.

Everywhere I turn recently I am finding more and more researchers that have had the ‘look at the bigger picture’ download. We even have this term ‘download’ that doesn’t apply to a computer anymore, but to an ‘anomalous’ phenomena concerning information ‘placed’ within a person’s consciousness by unknown intelligence. What that intelligence might be is most vividly discussed by Gordon White, who IMO, has very creatively evicted his mind out of the common thinking box and into a world of glorious unknowns, exploring with the greatest aplomb and intelligence that I have seen in a very long while.

There are others who are catching on – Grant Cameron with his theory of “WOW”! , and his recent speaking program titled Contact Modalities. I laughed when he said he thought that no UFO really needed lights on the craft and that the only reason they had them was to attract our attention! – theory of WOW! All of his research on right and left brain functioning, how to get contact by shutting off the monkey mind, creative people, artists and musicians, autism, split personality and the attendant DNA change that has been scientifically documented in one body according which personality is present. If I’m not mistaken Grant has also proven this happens with channelers too.

The weight of the evidence pointing to my little wittitude of years back: Consciousness IS the Unified Field is rapidly becoming un-ignorable. On all fronts and in all disciplines, there is a thread, a connection to consciousness. From ancient priests to scientist-philosophers to experiencer-scientists of today. Which brings me to Diana Pasulka.

Diana Pasulka’s new book is amazing, her view point erudite and eye opening from an academic point of view, especially from the religious studies genre.

More than half of American adults and more than seventy-five percent of young Americans believe in intelligent extraterrestrial life. This level of belief rivals that of belief in God. American Cosmic examines the mechanisms at work behind the thriving belief system in extraterrestrial life, a system that is changing and even supplanting traditional religions.

Over the course of a six-year ethnographic study, D.W. Pasulka interviewed successful and influential scientists, professionals, and Silicon Valley entrepreneurs who believe in extraterrestrial intelligence, thereby disproving the common misconception that only fringe members of society believe in UFOs. She argues that widespread belief in aliens is due to a number of factors including their ubiquity in modern media like The X-Files, which can influence memory, and the believability lent to that media by the search for planets that might support life. American Cosmic explores the intriguing question of how people interpret unexplainable experiences, and argues that the media is replacing religion as a cultural authority that offers believers answers about non-human intelligent life. From <https://www.amazon.com/American-Cosmic-UFOs-Religion-Technology/dp/019069288X/ref=sr_1_fkmrnull_1_sspa?crid=2J4W4IJSP96EZ&keywords=american+cosmic+ufos%2C+religion%2C+technology&qid=1554998276&s=books&sprefix=american+cosmic%2Cstripbooks%2C165&sr=1-1-fkmrnull-spons&psc=1>

Here’s the silly clincher though, all of us who have had contact have never needed verification of our own selves and our own experiences. Those that have the skills to use the exchange of information go on to do it and brings us great revelations and advancements for mankind, those that don’t have skills, like me, simply get to grow in spirit and heart.

I’d be willing to bet that if you asked every person alive in a 3D body on this earth at this time if they knew, quietly in the back of their mind, in their awareness somewhere that this is all true – without the cultural names and implications – without having to admit it to anybody else, they would all agree – we have all known for a very long time. It’s simply a problem of straightening the language out, the cultural beliefs out, such that one day we can all take a collective breath and sigh in relief that we can just say,

“Yeah, we knew – we knew all along. Cat’s outta the bag now, no problem man, no witch hunts, no roastings, no drownings, no lock ups and most especially no more killings over this issue.”

I wish we could just get out there and get on with it.